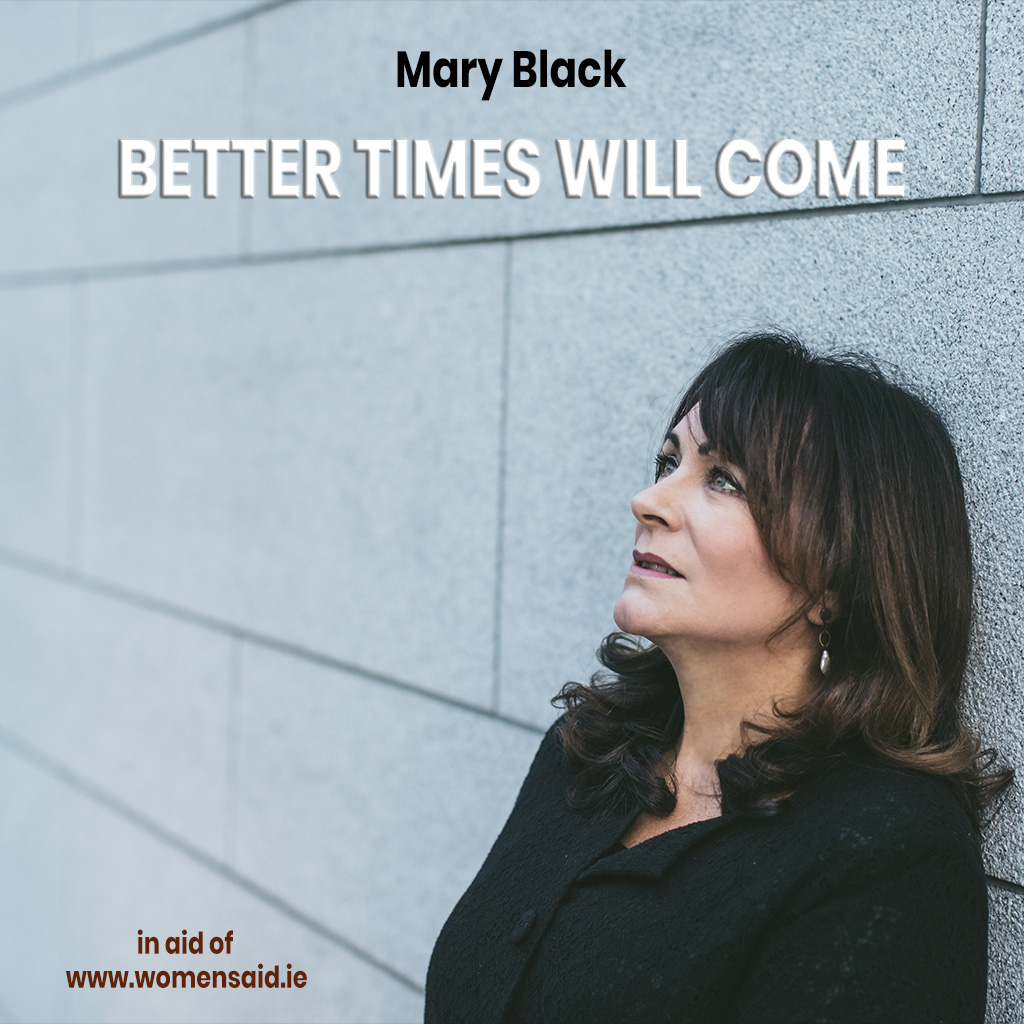 "I was hugely honoured to be asked by my dear friend Janis Ian to be part of a project she’s doing called the ‘Better Times Project’.

She asked a number of her musician friends to record (at home) a version of a song she wrote recently.

Since our time touring together back in the 90’s in Holland and Germany, we became great friends and have stayed in touch down through the years.

Janis is a wonderfully warm and giving person, with a huge talent as a singer songwriter, known throughout the world.

The lyrics and message in this song are so relevant in these troubled times.

The Pearl Foundation in the U.S. is Janis’s preferred charity, however if people would like to donate in Ireland, I’d like to nominate womensaid.ie, a charity close to my heart.

You can download a free copy of this song in the Discography section.

You can watch the video of the song in the Video section.

To view all other versions of this song in the Better Times project, please visit Janis Ian's website.

Online concert "Wish You Were Here" on 23 May

Online concert "Wish You Were Here" on 23 May 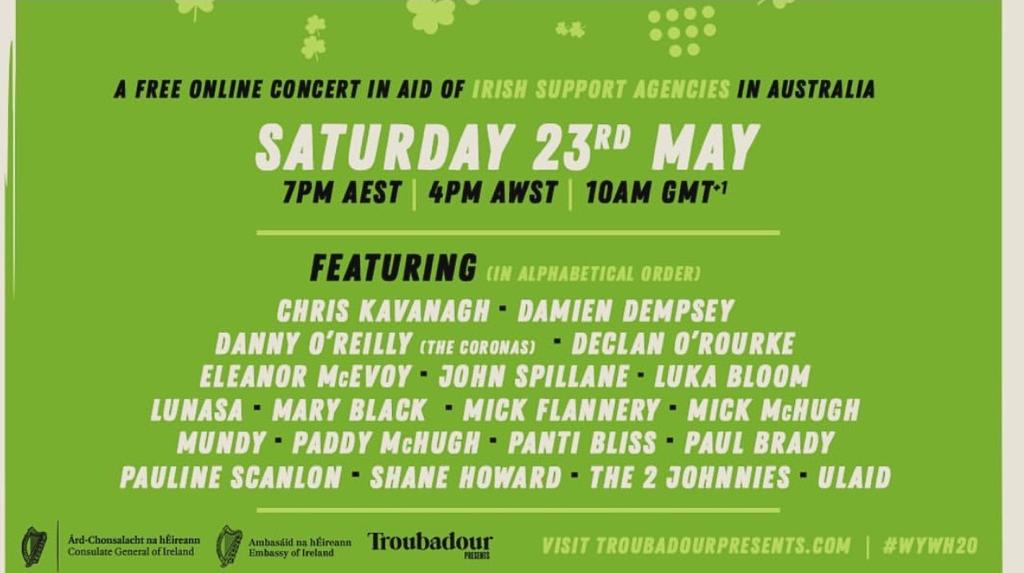 So happy to be part of this online gig to support my fellow countrymen and women in difficulty in Australia!

More details can be found here.

"It was such an honour to be part of the Late, Late Show last Friday night (May 8th), celebrating the Woman’s Heart album and singing alongside my lovely sister Frances, Sharon Shannon and Mary Coughlan.

Thanks to Ryan Tubridy and his team, the show generated over €2 million euro from the generous people of Ireland for the very deserving charity Pieta.

It really makes me proud to be Irish :) "

--
You can view the video of all of them performing A Woman’s Heart in the video section.

I hope you are all safe and well in these very strange and troubled times.

I was very disappointed to have to postpone the March and June gigs and it looks like the July dates won’t happen now either.

However, it’s for the good of all and hopefully it won’t be too long before I see some of you at one of my concerts in the future.

My friend Mike Wilson came upon a live concert from 1996 in Bremen which I had never seen before. I thought people might like the opportunity to see this, given that many of us have more time on our hands these days. You can find it on the site in the Video section.

Mark has kindly set it up for us ( thanks Mark )

With love and best wishes,

'I’m sorry to have to announce that my upcoming concerts have been postponed until the Summer. I was really looking forward to these concerts after a lovely rehearsal yesterday with my amazing band and Marcia Howard (singer/songwriter) who just arrived in from Australia. Our government has just announced that all indoor gatherings of over 100 people should not go ahead at least until the end of the month. I think this is a responsible action on their part and it’s for the good of all.

Stay safe out there - these are troubled times indeed’ - Mary.

The March concerts are being rescheduled, as soon as they are confirmed we will publish the new dates on the concerts page. 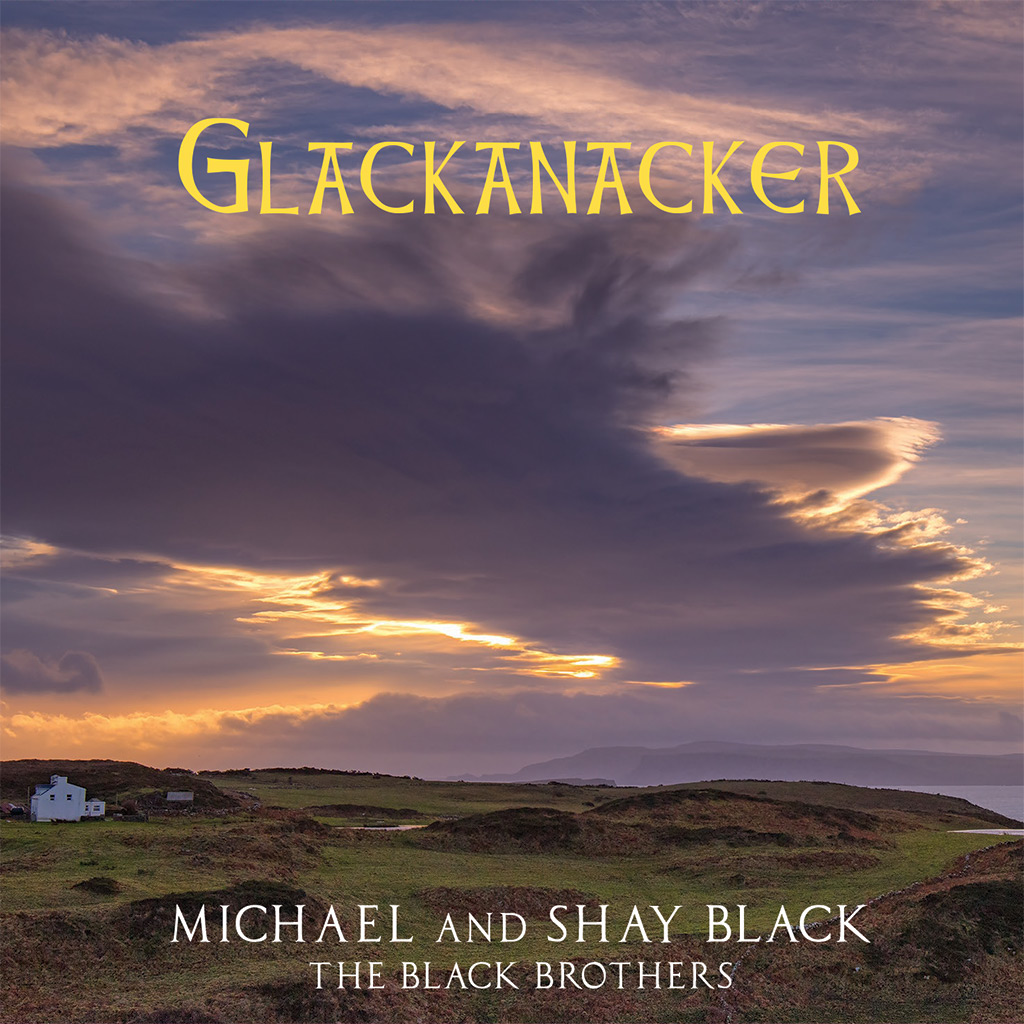 Mary’s brothers Shay and Michael, The Black Brothers, recorded a new album Glackanacker which has been released.

The Black Brother’s website has also been completely redesigned and now it’s design is complementary to the design of Glackanacker.

You can find all details about the new album here where you can also order the album in the webshop, listen to soundclips of all the new tracks and even download the online-only bonus track “Roller Bowler”.

Mary coming back to Utrecht

Mary coming back to Utrecht 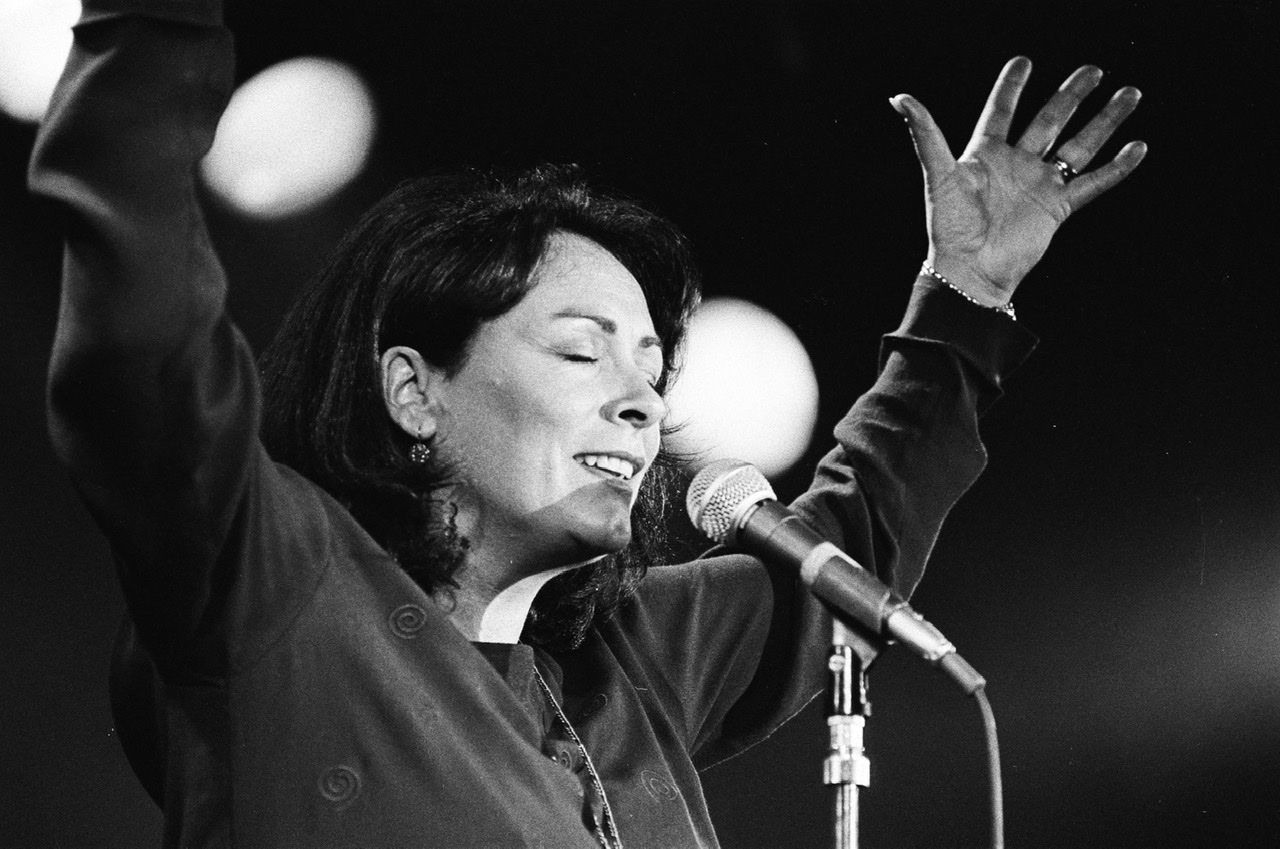 Mary is delighted to be coming back to The Tivoli (Utrecht, The Netherlands) again next October 10th.

She’ll be back with her all-star band playing favourite songs from her immense catalogue spanning over 30 years as well as showcasing songs from her new album ‘Mary Black Orchestrated’ with the RTE National Symphony Orchestra.

More details and tickets on the concerts page.

The album Mary Black Orchestrated will be released on vinyl on November 15th. The LP can already be pre-ordered in the webshop. 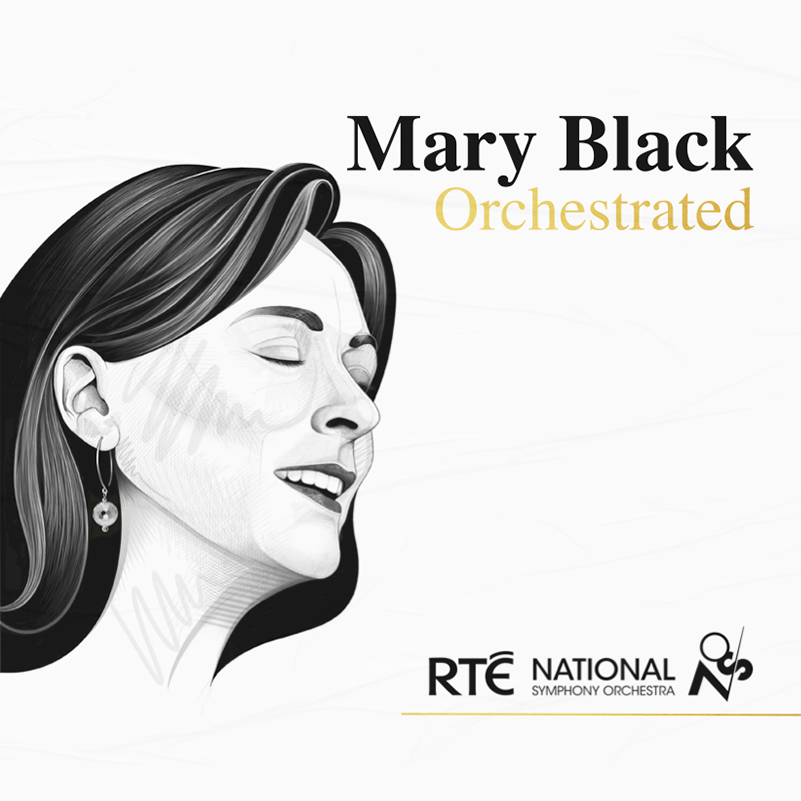 The album Mary Black Orchestrated with the RTÉ National Symphony Orchestra has been released on October 11th in shops and on digital streaming services.

You can also order the album here on this site.

'A great honour to have my favourite recordings orchestrated by the National Symphony Orchestra conducted by Brian Byrne here at the National Concert Hall. Looking forward to the final result and a Mary Black Orchestrated album release in October.’ - Mary

Carolina Rua is the first single for radio from the Orchestrated album. The original recording was for No Frontiers in 1989. The writer Thom Moore came into Windmill Lane Studios at the end of the recording sessions and played Carolina Rua to Mary on his guitar - she loved it and the band got working on recording it straight away. It was a big hit for Mary on radio at the time and always a huge favourite at concerts.

Brian Byrne has given it a whole new treatment with the orchestra and some new musicians and added the Crooked Road tune as well.

The Documentary ‘Mary Black - No Frontiers’ airs tonight, Monday 9th of September at 21:35 on RTÉ One.

In this landmark documentary on Mary Black, widely regarded as the first lady of the Irish music industry, viewers are promised to gain a rare, unprecedented insight into her life and career.

This one-off programme gives us access to all elements of Mary’s life where, for the first time she opens up on topics close to her heart such as motherhood, mental health and the realities of being the biggest female singer in 1980s' Ireland.

From her early beginnings growing up in a tenement on Dublin’s Charlemont Street to her international success with songs such as A Song for Ireland and the blockbuster success of A Woman’s Heart, this is her journey from childhood to iconic Irish singer.

Contributors include a wide array of those closest to Mary: her husband and manager Joe O’Reilly, children Danny O’Reilly (lead singer with The Coronas), Roisin Ó and collaborator Eleanor McEvoy.

Available on the RTÉ Player to the Island of Ireland at: www.rte.ie/player

'A great honour to have my favourite recordings orchestrated by the National Symphony Orchestra conducted by Brian Byrne here at the National Concert Hall. Looking forward to the final result and a Mary Black Orchestrated album release in October.’ - Mary

Ireland's Favourite Folk Song isn't a competition. It's far better than that.

Ireland's Favourite Folk Song isn't a competition. It's far better than that.

The Irish Times posted a review of the brand new RTÉ series celebrating the songs that define us as a people titled "Ireland's Favourite Folk Song". The series is presented by Mary Black. You can read the full article on The Irish Times website or in our Library 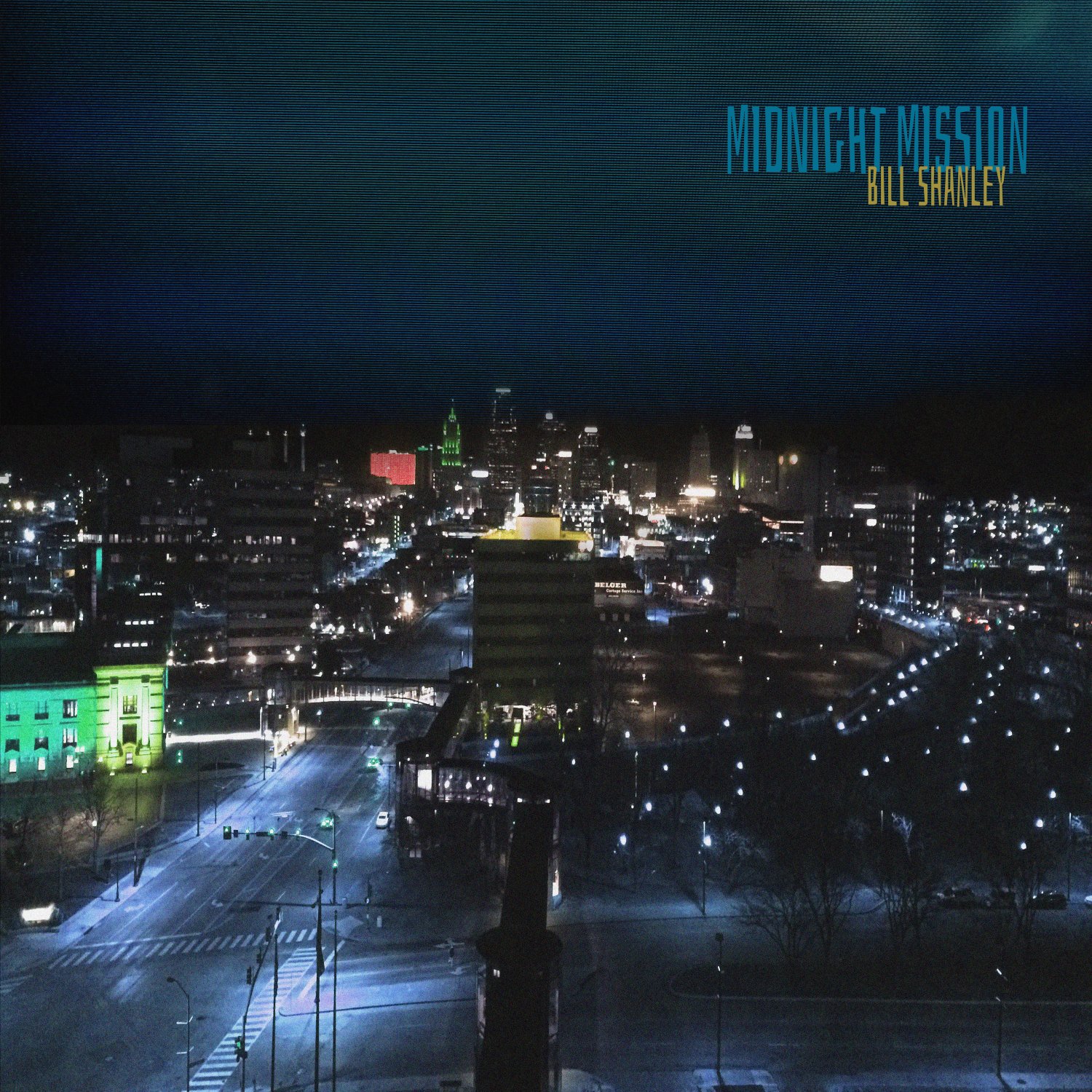 My gifted long time guitar player and friend Bill Shanley has just released a new solo album "Midnight Mission".
His talents go beyond guitar playing as a writer, arranger and producer.
This is evident in this wonderful piece of work which I highly recommend.
Give it a listen.

Links to all the digital releases of the album can be found at https://BillShanley.lnk.to/iLp52.


You can order vinyl and CD at https://cauldronmusic.bigcartel.com/…/midnight-mission-vinyl

Ireland’s Favourite Folk Song, launched on the Late Late Show on Jan. 18th, is a brand new RTÉ series and national campaign to identify and celebrate the songs that define us as a people.

“Folk music is in my blood. Many of these songs have shaped and defined my life. So I’m excited to be part of a conversation that celebrates our rich folk-song heritage” Mary Black

Throughout the centuries, folk music has immortalised the real, live experiences of the citizens who have lived on, or passed through this island. Ireland has a vast archive of beautiful folk songs, both in English and in Irish, which its citizens draw on in times of joy and sorrow, to entertain, or to capture big personal or historic moments. Many of these songs have been passed down through families for generations. Some of these songs were written by Irish people, some brought in from other cultures, but what sets folk music apart is that it captures the eternal stories, hopes and struggles of ordinary people.

And every one of us has a favourite: a song we sing at family events and get-togethers, or a song that is dear to us. And now RTÉ is asking the people of Ireland to tell us what their favourite songs are, and why.

Between now and 8th February, we’re asking you to log onto www.rte.ie/culture, click on the Nominate section and tell us what your favourite folk song is – and why you love it. It can be a love song, a political song, a song about nature, life, loss, emigration, whatever. It can be in Irish or in English. It can be an Irish song or an international folk song that we have taken to our hearts as a people. As long as it’s a folk song, and you love it, then it’s eligible for consideration.

Once we’ve gathered your nominations, an independent jury of music lovers and experts – see list below - will review the list and put together a shortlist of ten folk songs they feel best capture the public’s favourites, but also the spirit and story of Ireland. On 19th April, RTÉ will announce the 10 shortlisted folk songs to the nation in a special edition of The Ronan Collins Show on RTÉ Radio 1. Over the following five weeks, people will be invited to discuss the songs and tell us which one is their favourite of the 10.

To help people to make an informed choice, a brand new 5-part series, Ireland’s Favourite Folk Song, presented by internationally acclaimed Irish singer and folk legend Mary Black, begins on RTÉ One on 21st April. Each episode will tell the story behind two of the shortlisted songs. Audiences will be also able to discover more about each song across RTÉ Radio 1 and on rte.ie/culture.

The song chosen by you as the nation’s best-loved folk song will be announced live on The Late Late Show in May 2019.

We hope the public will embrace the spirit of this campaign, which is to celebrate one of the things we do best - and inspire the nation to sing, perform and love folk music.

For further information on the project and the selection process, please go to www.rte.ie/culture.

Mary is happy to announce the release of her new album “Mary Black Sings Jimmy MacCarthy” on November the 10th.

The album contains eleven songs written by Jimmy, 6 previously recorded by Mary, 4 brand new recordings by Mary and a TV recording of a Mary and Jimmy duet.

The album will be available on 10 November in shops in Ireland, on Mary’s website and on digital platforms such as iTunes and Spotify.

“A while ago I got a call from Jimmy. He asked me how I would feel about this project 'Mary Black Sings Jimmy Mac'. Without hesitation, I said yes and loved the idea, but it was only when I got to his place in Kilkenny and heard him sing his new songs that I got really excited. What a joy after all these years to have such great lyrics and new songs to sing from Jimmy Mac.”  - Mary

More details about the album can be found in the Discography section.

We found out that there’s no post going from Ireland to USA or Australia due to COVID-19. If you are in one of these countries, please refrain from ordering items from this website until further notice. We are sorry for any inconvenience this may cause.